Our nation must address the issue of anti-Asian hate and violence, a problem that has significantly increased throughout the United States.

In November 2019, I was attacked and physically assaulted by individuals of a family in front of a Chinese grocery store in San Francisco's Chinatown in broad daylight.  The adult assailant threatened to kill me, and attacked me with a thick glass bottle.  His son attacked me and hit me repeatedly with a long baseball ball.  The adult woman in that family watched with glee, along with another son.  The Chinese customers and workers at the grocery store witnessed the attacks and assaults against me with horror and helplessness. The adult assailant was charged with terroristic threats, elder abuse, and battery.  His son was also arrested and charged.  They should also be charged with hate crimes.  The attackers and assailants in this instance happen to be African American individuals.

Earlier this year, at the Trader Joe's store near Fisherman's Wharf, I was bullied, harassed, and threatened by a Caucasian male manager and an African American male store employee, and kicked out of the store. 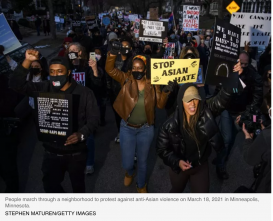 We must address this problem of anti-Asian hate and violence and the racism that fuels it.  Regardless of one's ethnicity or race, we must care about our fellow human beings.  We must also enforce the laws which are supposed to protect all of us.  When there has been a hate crime committed, its perpetrator should and must be charged with a hate crime.  The Asian American and Pacific Islander community and our fellow Americans are looking for leadership on these critical issues from President Joe Biden, Vice President Kamala Harris, Attorney General Merrick Garland, and Congress.

The NO HATE Act bill, which passed the House twice already, would revamp hate crime laws, which are very deficient right now; mandate reporting of hate crimes, and provide grants to law enforcement agencies for training on hate crimes.  It must be passed by the Senate without further delay.

The COVID-19 Hate Crimes Act bill would require the Department of Justice and the Attorney General to track progress of hate crimes, to make sure that there are prosecutions of them, issue guidelines to law enforcement agencies on reporting of hate crimes, and provide multilingual necessities to Asian American and Pacific Islander communities to report hate crimes.  This legislation will protect Americans from all communities in the U.S. by making sure that hate crimes are reported and prosecuted; this bill, too, must be taken up and passed without delay.