UNREDACTED MUELLER REPORT: RECLAIMING OUR DEMOCRATIC VALUES IN GOVERNMENT
May 23, 2019

RECLAIMING OUR DEMOCRATIC VALUES IN GOVERNMENT
BY ANH LĘ
Our nation is in serious trouble.

The president and administration flagrantly disregard, stonewall, and mock the investigations, subpoenas, and oversight work of Congressional committees.

The president walked out of a meeting at the White House with Speaker Nancy Pelosi, Senator Chuck Schumer, and others, scheduled to discuss our country’s infrastructure, and declared that he won’t work on all legislative matters with our elected officials until Congressional investigations stop. 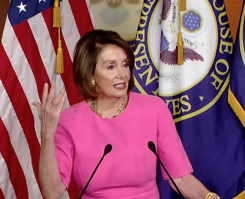 Speaker Pelosi has stated that she thinks the president is engaged in a “cover up.” Does Speaker Pelosi’s warning to the American people call for Congress to deliberate on initiating inquiries into impeachment?l

Our country is at a critical juncture.
We are witnessing more than just political chess games at the expense of the American people in the nation’s capital. Our belief in a democratic system of three equal branches of government is being severely tested and at stake.
Only We The People, we the American people, can and must address and resolve this constitutional crisis.
How we address and resolve it is in our hands.
Copyright By ANH LĘ, May 23, 2019