Presidential Candidate and former Vice President Joe Biden's selection of Sen. Kamala Harris as his running mate is the winning ticket this November.

Vice President Biden and Senator Harris will bring sanity in governance back to the White House and to our nation. 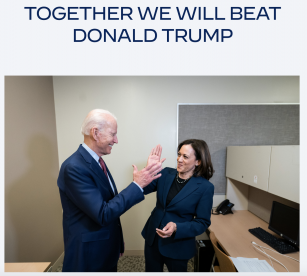 Their administration will bring back to our nation governance based on the constitutional and democratic values we uphold.

Senator Harris is brilliant and sharp.

She is passionate in her commitment to our nation's ideals.

Senator. Harris, and Senator Booker, stood on the Senate floor in June calling on it to adopt the Emmett Till anti-lynching bill, already passed by the House and Senate but now blocked by 1 Senator - - yes, an anti-lynching bill that remains held up in the United States Senate, in 2020.

Her questions to Attorney General William Barr gave him many opportunities to answer the questions, but his evasiveness was glaring.  The former district attorney and California Attorney General rendered him impotent.

Pence will be no match for Senator Harris at the vice presidential debate in October.  They are in different leagues.

Related Articles · More Articles
MAYOR LONDON BREED ANNOUNCES SAN FRANCISCO’S PARTICIPATION IN NATIONAL MEMORIAL TO LIVES LOST TO COVID-19
On the Eve of the Inauguration of President-Elect Joe Biden and Vice President-Elect Kamala Harris: A New Beginning
San Francisco Mayor London Breed's Statement on Dr. Martin Luther King Jr. Day Lauds President Joe Biden's VP Choice Kamala Harris
“Today we honor the life and legacy of Dr. Martin Luther King Jr, and we recommit to the vision and courage he embodied. More than ever, as we emerge from this pandemic, we must move this country forward to fulfill the ideals he fought for with his every breath," said Mayor London Breed. Read More
Back To Archives