Greetings of IMANI (FAITH) Beloved Sis-Stars and Bro-Stars in the Bay Area,
May this message find you and (y)our extended Family thriving and in healing Spirit.  i have a special request.  Would you please review and consider signing and sharing our Petition?  It is to the BART Board of Directors to Add THOMAS L. BERKLEY's Name to the 19th Street Oakland BART Station.  It is being launched by our FONAMI, KISS MY BLACK ARTS and AFRICANS DESERVE REPARATIONS NOW!... and supported by CommUNITY artists, organizers and change-makers like Queen Mother Gayle Berkley (daughter of Ancestor T.L. BERKELY); Elder Paul Cobb (Publisher of the Post News Group); members and retirees of several labor unions (including ILWU and SEIU); contributors to our San Francisco Bay View; Spiritual leaders and activists.  Asante Sana (Many Thanks) for joining us in achieving this modest act of recognition for Mr. Berkley and our African American residents.  Ase'.  Amen.
With Great Respect, Gratitude and Love!
Baba Jahahara and Baba Rtystk 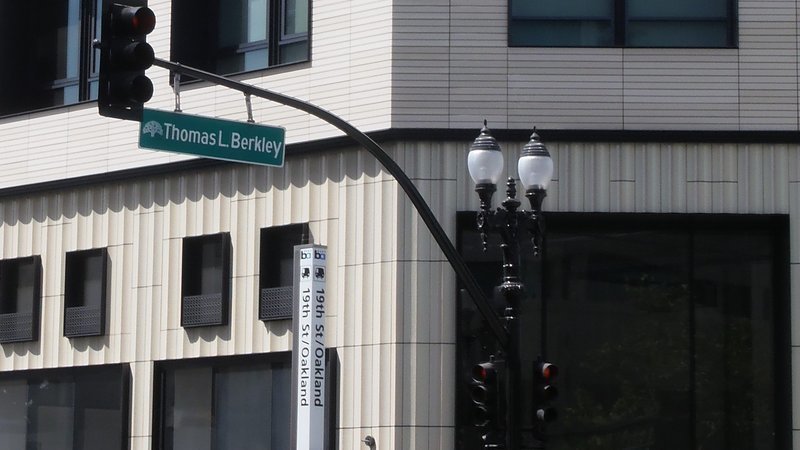 We—as Bay Area residents, riders and financiers of our public BART system—support the addition of THOMAS L. BERKLEY’s name to the 19th Street Oakland train station(s). Mr. Berkley was a great family man and father, human and civil rights advocate, accomplished attorney, founder/publisher of the Post newspapers around the Bay Area, world-renowned athlete as well as a past President during the major expansion of our Port of Oakland. Based on his many contributions, the City of Oakland named 20th Street in its Downtown/Uptown area for him, in 2002. In fact, the two main entrances of the falsely-named “19th Street Station” are on Broadway at Thomas L. Berkley Way (one of the busiest stations and bus transfer points in the entire system), not on 19th Street. We encourage the BART Board to immediately make this change and recognize one of the Bay Area’s great contributors and the first of African American ancestry. Finally, as the station is currently under reconstruction, we ask that the BART Board allocate special funding for public art and information regarding Mr. Berkley’s achievements to be placed inside and around our proposed 19th Street Oakland/Thomas L. Berkley station(s). Thank You!

Related Articles · More Articles
SF BayView Editor: International Tribunal of Legal Experts to Judge U.S. Human Rights Abuses Against Black, Brown and Indigenous Peoples
Please consider being a witness to this historic event: International Tribunal 2021 We Charge Genocide! Much, if not all, of the work that we and our organizations are doing is addressed in the six charges being presented – recognition from the international jurors will only help our work moving forward regardless of the outcome.
MAYOR LONDON BREED AND SUPERVISOR RAFAEL MANDELMAN INITIATE STEPS TO REFORM ELECTRONIC MONITORING PROGRAM
Mayor London N. Breed and Supervisor Rafael Mandelman have initiated steps to work with the Sheriff and the Adult Probation Department to reform San Francisco’s electronic monitoring program. This public safety tool needs reforms to achieve its original deterrence function, while also serving as an alternative to incarceration.
SAN FRANCISCO CELEBRATES MAJOR CLIMATE SUCCESS WITH 25 YEARS OF COMPOSTING
Mayor London N. Breed today commemorated 25 years of organics recovery in what has been hailed as the most successful, comprehensive, and innovative composting program in the country. Since 1996, residents and businesses have recovered organic material, primarily food scraps, away from landfills and applied to local farmland, vineyards, and ranches. Today, the City collects more than 500 tons per day from the green bin.
Back To Archives