The screening and salute will be held at the Marine’s Memorial Hotel In San Francisco on Sunday, Father’s Day June 18th.

San Francisco-Among the more than 50 films from around the world to be screened at the nineteenth San Francisco Black Film Festival at venues to include SPUR, the DeYoung Museum, the African American Arts and Culture Complex, the War Memorial Building and Marines’ Memorial Club and Hotel, is its publicist Jackie Wright’s documentary “Love Separated in Life…Love Reunited in Honor” that shows the impact of the war on citizens as a result of governmental decisions.

“Love Separated in Life…Love Reunited in Honor,” (https://vimeo.com/218290377) a documentary short of less than fifteen minutes spans fifty years and two continents as the Wright family in the United States touch the Quang Family of Vietnam as a result of two anniversary gifts commissioned by Sp5 Wyley Wright Jr. to honor “Ouida, the Love of My Life.”  The film was written and directed by Jackie Wright and directed and edited by Jack LiVolsi, founder and CEO of Jackson Street Productions.

The story begins fifty years after Secretary of Defense Robert S. McNamara witnessed Sp5 Wyley Wright Jr.’s death on March 9, 1964, while serving as a crew chief for the United States Army Vinh Long based 114th Aviation Company, “The First to Come Last to Leave.”  His four children have him exhumed from a deteriorating segregated cemetery in north Jacksonville, Florida.  Sp5 Wright was reburied fifty years almost to the day of the anniversary of his death with a ceremony at Arlington National Cemetery on March 10, 2014.   The Wright siblings, Jackie (63), Joe (61), Stanley (58) and Phyllis Cameron (53) also had their mother, Ouida F. McClendon Wright, exhumed from the historic “Green Acres Cemetery” in Columbus, Georgia, near Fort Benning, GA to be reburied with her husband during a ceremony with full military honors.

The Wright story includes a young PFC John Francis Shea of Willimantic, Connecticut who died on that fateful day with Sp5 Wright; a former soldier who uses the handle “Cobra Gun,” George Moll of Houston, Texas who came to Arlington to grieve with the family of his fellow comrade and mentor; and Ms. Virginia Shannon Young, the widow of Kenneth A. Shannon, a helicopter pilot, who died five days after Sp5 Wright leaving his wife with a babe in arms and a toddler.  The 114th Aviation Company Installation was named “The Shannon Wright Compound,” something the Wright siblings did not know for most of their lives.  That fact is chronicled in a little known book by Ray Bows and Pia Bows, “In Honor and Memory,” that has over 800 installations in Southeast Asia listed that honored soldiers of all U.S. military branches.   This book came to the Wrights attention last year after a volunteer with Bows, Steven Elliott of Jacksonville, Florida called Jackie in March 2016 to say that Bows had been looking for a photo of Sp5 Wyley Wright Jr. for twenty years.

“The Wright story came across my desk May 2016 when we were preparing to unveil at Wilberforce University in Ohio, a miniature bronze statue of Colonel Charles Young, an African American military hero, who distinguished himself by being the third African American to graduate from West Point and leading the Buffalo Soldiers,” said Charles Blatcher, III, Chairman, National Coalition of Black Veteran Organizations.  “I salute the San Francisco Black Film Festival for selecting “Love Separated in Life…Love United in Honor” and other military themed films for its lineup because enough has not been said about the role of African Americans in the Vietnam War and the military in general.” 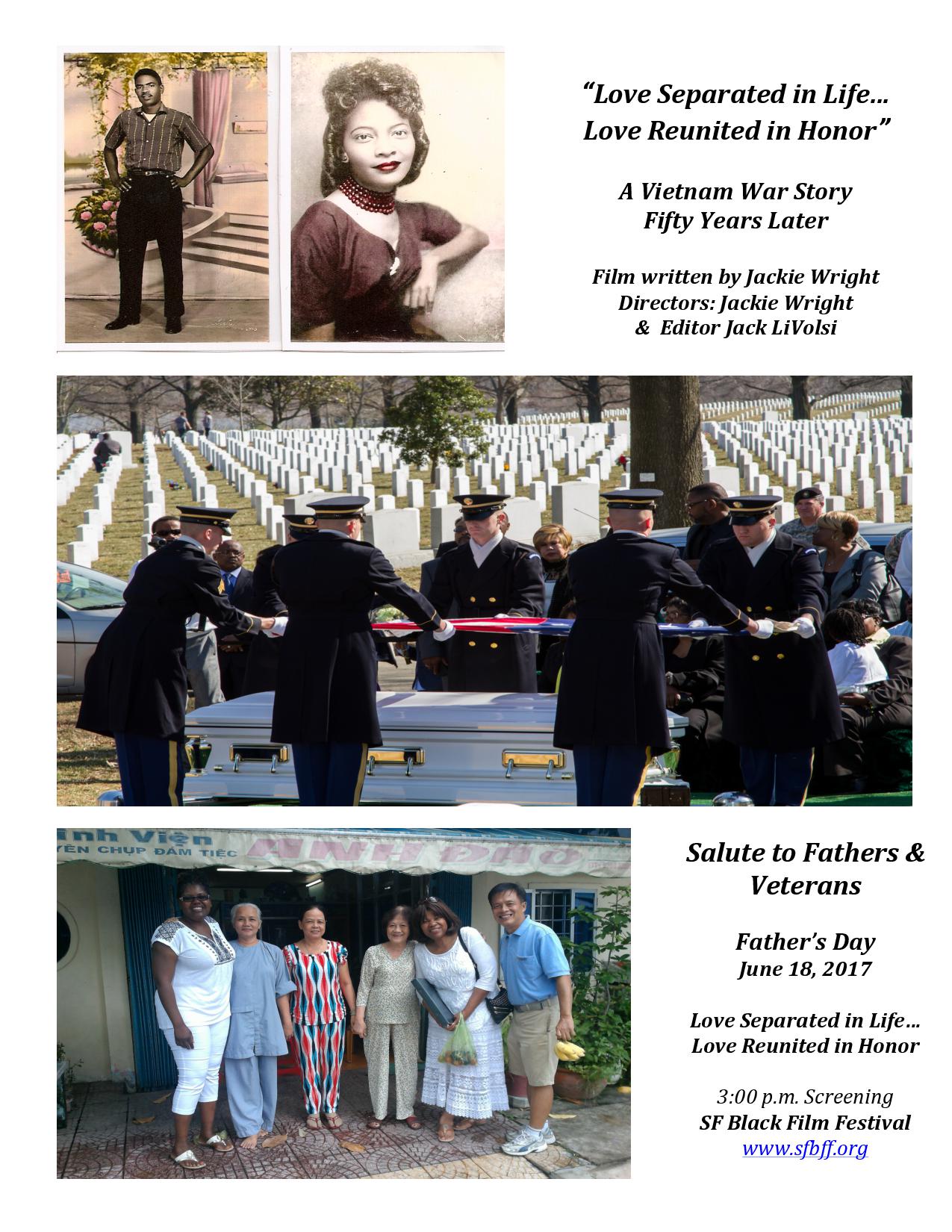 The San Francisco Black Film Festival Veterans and Father’s Day Salute on Sunday, June 18th at the Marines Memorial Hotel which recently screened an episode of Ken Burns’ and Lynn Novick’s  “The Vietnam War” will include: 95 Never Looked So Good (9m, U S A) directed by Tymm Holloway which highlights Simeon Holloway accomplishments from early beginnings to the prominent historical record of his involvement in the elite first all Black US B-1 Navy Band;

Rolling In the Deep-(12m) directed by Marcellus Cox , which is Inspired by true events about an African American World War II Veteran who travels back home to South Carolina looking to achieve a goal for his late Father by having a meal at a locally famous Whites Only diner;

San Francisco Black Film Festival Encore “Brown Babies: Germany’s Lost Children” –(30m)by Michaela Kirst, which highlights the relationships between World War II Black U.S. Soldiers and German Women that resulted in mixed heritage children.  After decades of not knowing her heritage, “Brown Baby” and genealogist Henriette Hood Cain helps Peggy Blow, a fellow classmate at Baker High School in Columbus, Georgia, find a sister and two nieces in Germany and unbelievably, a sister in California, after years of thinking she was alone in world without siblings; and Afro.Germany (52m) by Axel Primavesi (52 min)-Black and German: journalist Jana Pareigis often gets asked about her skin color. It’s been a big deal for others since her childhood. What is it like to be black in Germany?

For more information about San Francisco Black Film Festival XIX and its lineup of films and activities to include panel discussions, parties and a contest-honoring Dad, “My Dad Is My Hero,” visit www.sfbff.org.

Ave Montague (1945-2009), arts impresario, fashion industry executive, publicist, founded the San Francisco Black Film Festival in 1998.   Montague created the San Francisco Black Film Festival, a 501c3 nonprofit, with the artistic vision to provide a platform for Black filmmakers, screenwriters, and actors to present their art. As a competitive film festival, SFBFF identifies filmmakers, screenwriters, and actors that are emerging as talents and established artists who are contributing to the cinematic legacy of African Americans.

SFBFF conscientiously expands the notions of “Black film-making” to a global perspective. The organization is multicultural and inclusive of all in the expression of the African Diaspora experience.

The Mission of the San Francisco Black Film Festival is to celebrate African American cinema and the African Cultural Diaspora and to showcase a diverse collection of films – from emerging and established filmmakers. This is accomplished by presenting Black films, which reinforce positive images and dispel negative stereotypes, and providing film artists from the Bay Area in particular and around the world in general, a forum for their work to be viewed and discussed.  The San Francisco Black Film Festival believes film can lead to a better understanding of and communication between, peoples of diverse cultures, races, and lifestyles, while simultaneously serving as a vehicle to initiate dialogue on the important issues of our times.

SF Chronicle-SF BFF Not Just for One Race 2015