The Homeboy-Homegirl Reunion marks its tenth anniversary, Saturday, October 12, 2019 from 12 noon-6:00 p.m. at the Cedar Hills Recreation Center in Columbus, Georgia. Born of the desire to give back to community and remind South Columbus friends and family of their positive roots and the fact that "with God all things are possible, Joe N. Wright, U.S. Army Veteran and Stanley Wright, owner of "Done Wright Trucking, LLC in South Carolina started the gathering at the old Cedar Hills Subdivision Recreation Center, which borders the Sand Hill section of Fort Benning, Georgia. With a banner titled "Disciples of Christ" and a call to his brother in South Carolina to help, Joe began posting the sign ten years ago at what is left of the old recreation center that was vibrant in the 70's when the Wright brothers attended the now demolished Baker High School. Baker High School, where mostly military families attended, was the place where Joe met his wife to be, Brenda M. Tibbs, who since passed nearly a year ago November 18, 2018 from complications after surgery.  It was also Baker, where Stanley met his wife of 33 years, Viola Barnes, the daughter of a then U.S. Army Staff Sergeant E-7 Romeo Barnes. It was family and military ties that brought Joe back from California's San Francisco Bay Area, where he worked as a bus driver for MV Transportation and Brenda, from her Caltrans position of thirty years to Columbus, Georgia in 2009 to care for her father. Retired U.S. Army Staff Sergeant E-6, longtime resident of Columbus' Holly Hills subdivision, Bruce Tibbs, a widower declining in health since the 2002 death of his wife Doris Tibbs, a former Fort Benning civil servant and after his retirement from Columbus Transit System, needed his daughter's care.  Brenda lovingly cared for her father until her death in November 2018 after suffering from complications from surgery.  Joe continues to care for his father in-law whose ambulatory strength has waned. Along the way of life's duties and responsibilities, every October, Joe and Stanley combined their personal funds to have a cook out to gather their old friends from Cedar Hills, Washington Heights and Willis Plaza.  "I'd see some of my friends that had promising futures struggling and God put in my heart to gather them together to share how Jesus delivered me from hardships and he could do the same for them.  My mission is to remind them of our greatness and value," said Joe. Joe and Stanley began asking friends to help them out by setting up, cooking and serving people.  The focus was to rekindle the fire of hope among old friends, some of whom had lost their way.  It was the Home Boy Reunion, where old friends, very accomplished and ones not doing as well, began connecting again. Having had their own past struggles in California the Wright Brothers began sharing the love of Christ; of how God made a way for them to overcome.  "Over time, not only were the Homeboys attending but the Homegirls as well," said Stanley.  "Then we started seeing generations at our October gathering, the sons and daughters of the Homeboys and Homegirls and even their mothers and fathers." The alcohol and drug free gathering of just friends getting together to reminisce and speak of future dreams for themselves once again and for their children has expanded from a South Columbus event to include neighborhoods and high schools throughout Columbus. As the group gathers, there is encouragement for those who have experienced tough times.  "It's a woke for real experience of heart to heart exchanges with a lot of laughter," added Joe.  Accolades are given to the doctors, lawyers, bankers, soldiers, real estate agents, truckers, business owners, writers, Broadway stars, models, musicians, preachers, teachers, janitorial services owners, inventors, and "salt of the earth" people who are working to make Columbus and cities they now reside in great places to live and thrive. One recent accolade is that for Dr. Joyce Dent Fitzpatrick, who was recently promoted to Captain in the Columbus Police Department.  Dr. Fitzpatrick's parents Mr. and Mrs. Tommie Lee Dent still reside in the Cedar Hill Subdivision. "It's great to see Joe and Stanley spearhead a simple thing like this

gathering to help build community," said Katie Morris, a retired realtor, owner of eldercare homes and cousin of the Wrights via their mother.  Mrs. Morris, her husband Army Veteran Robert Morris Sr. and their children Robert, Wayne and Diane lived across the street from the Wrights during those early years in Cedar Hills.  "Their parents would be proud, " she continued.  Mrs. Morris referenced Sp5 Wyley Wright Jr. and Ouida F. Wright, who died while the Wright siblings Jackie, Joe, Stanley and Phyllis were children. 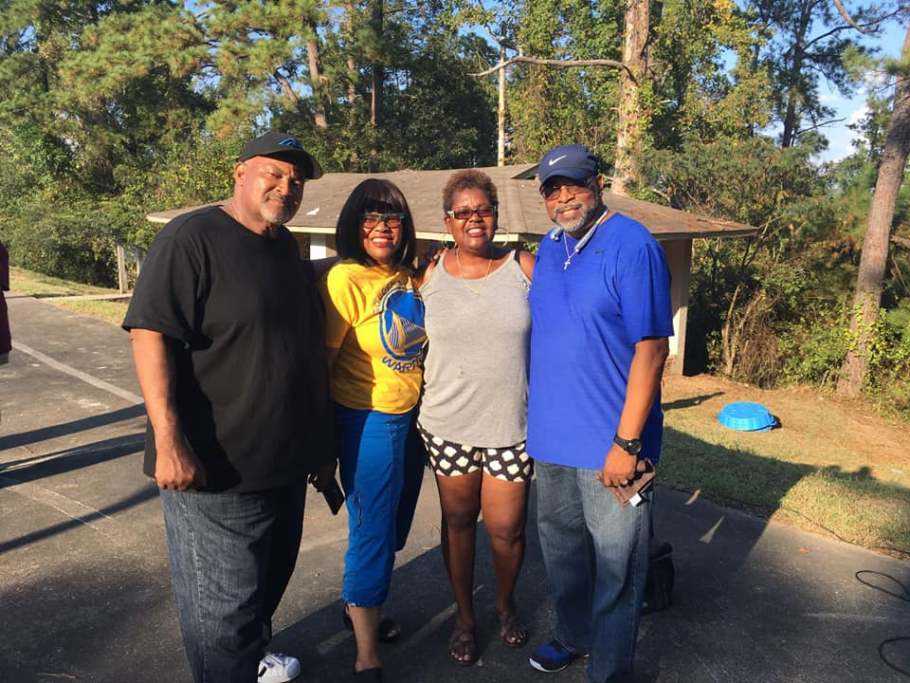 They honored their parents with reburial at Arlington National Cemetery  on the 50th and 44th anniversaries of their deaths almost to the day on March 10, 2014.  Ouida Wright's purchase of land with insurance proceeds from her husband's death in Vietnam, March 9, 1964 allowed her to build a home in the then new subdivision for Blacks in Cedar Hills.  Ed Stovall, a rare Black contractor built the home at 1103 Bedford Avenue and subsequently the M.L. Harris United Methodist Church at the corner of Bedford and Cusseta Road. "Our hope is that our gathering will encourage City leaders to revitalize the old rec and the neighborhoods of South Columbus, starting with rekindling hope in people," said Stanley. "We see God moving as lives have been changed for the better by our coming together to remind each other of our great value as a people who have always overcome struggles," said Joe. The Homeboy Home Girl Reunion is from 12:00 noon -6:00 p.m. Saturday, October 12, 2019 at the Cedar Hills Recreation Center. After the Homeboy Homegirl Reunion 10th Anniversary Cookout,  the Baker High School Class of 1979 will be hosting a  '79 Reunion and Fundraiser Party from 8:00 p.m.-10:30 p.m. at the Marriot PC.  All classes and those interested in celebrating life are welcome to attend the 70's themed fundraiser party at the Columbus Trade Center Room #104.  Spearheaded by Nina Ware and a committee of Baker Lions, the evening event with "light hors d'oeuvres, cash bar and all the disco music you can stand," will benefit the Baker Middle School. Quoting Michelle Obama and aligning with the spirit of the Homeboy Homegirls Reunion,  "When you've worked hard, and done well, and walked through the doorway of opportunity, you don't slam it shut behind you.  You reach back and give other folks the same chances that helped you succeed..." Ware's Facebook invitation calls for donations to invest in the future of students.  Click this link for tickets and more information: https://tinyurl.com/BHS-40th-Reunion-Fundraiser ###