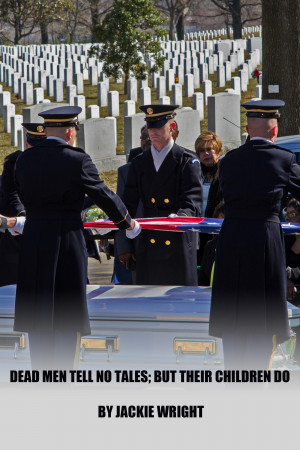 Jackie Wright, President of Wright Enterprises, penned a short book that preceeded her film "Love Separated in Life...Love Reunited in Honor."  It chronicles the memories of the immediate reaction to the news of her father, Sp5 Wyley Wright Jr.'s death early in the Vietnam War as an "Honor Guard" for Secretary of Defense Robert S. McNamara.

Amid old headlines and recent headlines generated by NPR's Ken Burns and Lynn Novick's "The Vietnam War," the voices of those affected by the war other than generals and politicians, are rarely heard. Voices impacted at the ground zero heart level of war are often muted. It took San Francisco/ Dallas publicist Jackie Wright, an award-winning journalist more than forty years to come to terms with the fact that the Vietnam War had been devastating to her child's heart and her family. "Dead Men Tell No Tales; But Their Children Do" is the start of Wright taking a small glimpse at the fact she had been carrying around an unattended war wound most of her life.
The unspoken directive of soldiers' children to have a "stiff upper lip" and "don't let them see you crying" shut down the most obvious revelation that the hell of war hurts and the pain can last a lifetime. "Dead Men Tell No Tales; But Their Children Do," became the pathway for discovery yielding Wright's short inspirational documentary film, "Love Separated in Life...Love Reunited in Honor" co-directed with Jack LiVolsi of San Francisco's Jackson Street Partners, (https://vimeo.com/236990657). It's about the reburial of her father, Sp5 Wyley Wright Jr. at Arlington National Cemetery after being exhumed from a segregated cemetery in the South. His beloved wife Ouida Fay Wright ( who became comatose when she received the news of his death as described in "Dead Men Tell No Tales; But their Children Do) was reburied with him at a ceremony on March 10, 2014, marking almost to the day, the 50th and 44th anniversaries of their March 9, 1964 and March 9, 1970 deaths.
The reburial with full military honors occurred during the 50th Anniversary of the Civil Rights Movement and the 150th Anniversary of Arlington National Cemetery. The film demonstrates the best of President Harry Truman's Executive Order 9981that desegregated the military. "Love Separated in Life...Love Reunited in Honor shows the coming together of Black, White and Vietnamese families to honor a Fallen Hero.  "Love Separated in Life...Love Reunited in Honor" (www.lovereunited.org) was been screened at the San Diego Black Film Festival at the ArcLight Cinema La Jolla in San Diego. The film received The Houston International Film Festival's top Gold Remi Award in its category.  "Dead Men Tell No Tales; But Their Children Do" is the beginning of the beginning of revelations about Vietnam for Wright and her family. It speaks to families that have experienced the pain of war to speak up and speak out and gives others an understanding not to speak shallowly, "Thank You For Your Service."
For book signing appearances and film screening opportunities,  contact Jackie Wright, Lovereunited2014@gmail.com.