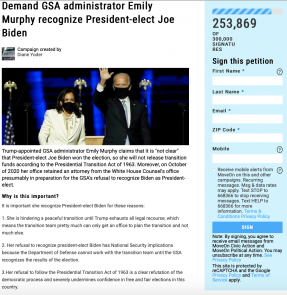 Could you please share with us a little bit about yourself.

Diane Yoder (DY): I am a homebound service teacher from Wisconsin.

Anh Le (AL): Please share with us about your nationwide petition.

What inspired you to start this petition?

Diane Yoder (DY): Like all of us, we spent an uneasy week waiting for the election results.  I was shocked when soon after, Emily Murphy from the General Services Administration (GSA), this government office that probably many hardly ever heard of until now, decided she didn't want to recognize Joe Biden as the winner of the election.  I read an article about it late at night and right after, I wrote out this petition.

AL: What are the main issues or problems you want to bring to the attention of the American people through your petition?

DY: The main issue is that I want people to stand up for free and fair elections in this country as we have had for the last 243 years.  I feel like the Trump Administration has consistently tried to undermine democracy especially free and fair elections with their constant lying about how elections here are rigged and how people cheat when even his own head of election cyber security stated this election was the most secure in history.  Trump has now fired that man which tells you how corrupt Trump is for firing someone who tells the truth.

AL: What are your concerns about the ongoing refusal by the GSA administrator Emily Murphy to approve access to the resources of the presidential transition office for President Elect Biden and Vice President Elect Harris?

DY: My concerns are that there are 73 million people who voted for Donald Trump who really feel like democracy has failed them and they would rather see an authoritarian in office who doesn't need Congress to do what they want him to do and who promotes this fallacy of law while flouting the law himself.  We cannot afford to lose democracy in this country and as far as I'm concerned, Emily Murphy is as anti-democracy as the rest of the Trump Administration.

AL: What does that mean to President Elect Biden and Vice President Harris?

DY: Mr. Biden said that the transition would carry on in spite of Emily Murphy's refusal to sign transition papers.  However, to the world who is looking at this right now, we look like a banana-republic led by a tin-pot dictator who cannot recognize reality and his staff and cabinet have caught the same delusion.  It is important that the United States carry on free and fair elections and that we repudiate authoritarianism and corruption at every level.

AL: What are the consequences to the United States and to us, the American people?

DY: The consequences are if we no longer have free and fair elections, if we allow people like Donald Trump to control elections and say that they're only valid when he wins, is the loss of all of our rights and freedoms right down the line.

AL: What will it take for Emily Murphy to approve the access to the transition office?

DY: At this point I have no idea. She seems like she's stubborn as a mule.

AL: What is your perspective regarding the role of the Senate Republicans who strongly support the president's efforts to reject the decisive election outcome, and who remain silent?

DY: I think they are cowards who don't really represent the ideals of the United States of America.  They pretend to, in order to get votes.  To me that makes them all liars as well as cowards.

AL: For these Republican Senators who remain silent, what does their silence mean?

DY: To me their silence means complicity with Donald Trump and I think they should be ashamed of themselves.  The only reason why they're supporting him now is to keep him quiet like a toddler who needs a lollipop because they need his support for the Georgia Senate run-off elections.

AL: What is their responsibility to the people of the state they represent specifically and to the American people as a whole, in terms of the election outcome?

AL: What are your thoughts regarding how people in Wisconsin felt about this presidential election and how Wisconsinites voted?

DY: I can't speak for everyone in Wisconsin but I feel that 8 years of bad policies from our former Governor and Trump sycophant Scott Walker and his cronies soured many of the people in Wisconsin against this current Republican Party.  When they made us show up to vote during quarantine and then took away our absentee ballot extension, I really think that was the straw that broke the camel's back.

DY: The American people felt very strongly about voting for the first time like this ever.  I was really gratified to see how many people turned out to vote.  Record numbers.  It should be like that for every single election.  We cannot afford to let apathy set in ever again or we will get another Donald Trump.

AL: What are your hopes and aspirations for our nation today and the future, for us the American people?

DY: I was gratified to see so many young people taking political action, from the creative use of Tik Tok to affect Trump's Tulsa rally, to seeing how many young people turned out to vote in this election.  It is my hope that young people like my sons will continue to be politically active in their democratic republic because all citizens have a duty to not only vote but to tell their elected representatives what they want and what they do not want from them.

AL: What are the latest updates regarding your nationwide petition?

DY: My petition has been featured on CNN, and mentioned in the Washington Post.

AL: Where can people go to sign your petition?

DY: People can go to:

AL: And how do people let their family members, friends, co-workers and others know about your petition?

DY:  Please keep standing up for democracy and free and fair elections!

AL: Thank you very much for taking the time to share with us.

DY: Thank you very much. Thank you for helping spread the word about it!

"There comes a time when silence is betrayal."
Dr. Martin Luther King, Jr.

"The time is always right to do right."
Dr. Martin Luther King, Jr.

"The arc of the moral universe is long, but it bends toward justice."
Dr. Martin Luther King, Jr.

"Never doubt that a small group of thoughtful, committed citizens can change the world; indeed, it's the only thing that ever has."
Margaret Mead

(1) MoveOn.org's video of Diane Yoder saying why she started the petition:

Related Articles · More Articles
MAYOR LONDON BREED ANNOUNCES SAN FRANCISCO’S PARTICIPATION IN NATIONAL MEMORIAL TO LIVES LOST TO COVID-19
On the Eve of the Inauguration of President-Elect Joe Biden and Vice President-Elect Kamala Harris: A New Beginning
San Francisco Mayor London Breed's Statement on Dr. Martin Luther King Jr. Day Lauds President Joe Biden's VP Choice Kamala Harris
“Today we honor the life and legacy of Dr. Martin Luther King Jr, and we recommit to the vision and courage he embodied. More than ever, as we emerge from this pandemic, we must move this country forward to fulfill the ideals he fought for with his every breath," said Mayor London Breed. Read More
Back To Archives